Spirit Trail.  I arrived at sunset, locked the truck, placed a small flashlight in 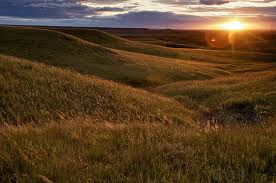 my pocket, and hooked my water bottle on my braided leather belt. Across the grasslands Mingus mountain rose up to an imposing cumulus cloud bank.  Lightning crackled and broke the length of the range.

Folklore names the full moon of July the thunder moon, and thunder rolled from the far mountains to the meadow in which I stood.  In the nearly extinguished light, the land trembled.  I could see from the flatland where I stood to the first distant rise in the trail.  That was where it seemed the curtain of storm was drawn across the landscape.

The only lightning in the area was over the mountains miles away. I was drawn to this place on this night, the phase of the moon, and the threatening conditions. I passed through the gate and began my journey.

The lights of the village behind me, the rising full moon before me was totally eclipsed by the thunderheads. I wondered if the batteries would last for the return trip.

I walked as I had become accustomed to walking in the wild lands, by talking out loud to whoever listens in such places.

I calmed a bit as I walked.

“Could you send me a sign?  How about a spirit animal with a message of wisdom and great abundance?  Or a burning bush maybe?”

Having been face-to-face with unexpected  animals in the wild, I had momentary second thoughts, . . especially when recalling the creature from my dreams.  That is what brought me here.  The dream of the wild man crept around the periphery of my thoughts..

To shake off the fears and doubts I moved in to my usual hiking ritual, . . talking myself through the Serenity Prayer. Some times it requires verbal wrestling to get through it.

“Higher Power, God, Goddess, Creator, Great Spirit, Yahweh, whatever Your Name, you know who you are.  You know who I am.  I hope I have my bases covered.”

“Please grant me the serenity to accept the things that I cannot change.”

“I mean if it works out that you can help me with this, I would be grateful!”

“I tend to carry the weight of the world on my shoulders, and my shoulders hurt, and I need a rest.”

“Also, please grant me the courage to change the things I can change in the world. Yeah a double dose of courage for that. I have learned some things that can help victims of terrible crimes against humanity. Well you know.”

“It is no surprise to you of course, I want to share what I have learned in a way that helps those innocents who suffer for the sins of others. , etc. etc. You get my drift.  You been there from the beginning!”

“You know sometimes I think nobody wants to hear what I have to say! Can you help with that? If so, I would greatly appreciate it.”

“Also, please help me with the wisdom to know the difference between what I can and cannot change. I don’t want to hit my head against a wall or spin my wheels or waste anybody’s time, most importantly my own.  I am a grandfather! I’m getting old.  I should be retired and writing my memoirs.”

In the darkness quietly, my voice became more relaxed and reverent.

“Hey, you’re an infinite being of infinite understanding. I’m counting on you havin’ an infinite sense of humor.”

“Sorry about the whining.”

“You know my heart.”

The sun well-set and well-behind me.

Lightning crackled above the mountains ahead.

In my dream I was traveling north in a car on a brightly lit day. The landscape was 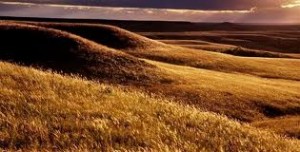 miles of gently rolling prairie flush with wheat-colored grasses waist-deep for a standing adult. As I passed near a low hill with an exposed rock outcropping, I saw something move.

An animal was crouching in the grass in front of the rocks. I would not have noticed it, but for the fact that whatever it was had moved sideways and then disappeared. I was moving quickly and so I fixed my sight on this strange phenomenon. Then it stood up, and I could see something larger than a man move on two legs.

I was stunned. It was an ape-like creature covered in hair the same color as the grasses. The streaks in the creature’s coloring provided perfect camouflage, near invisibility. It looked at me with peaceful purpose as if to say, “See me.”

The next thing I knew I had driven past the outcropping, and I was on the other side of the hill from the creature. I was stopped, out of my vehicle, up against something, trying to back up, wanting another look.  It was quickly getting dark, and I was afraid of knowing what I had seen . I was also keenly aware at that moment that I had seen this creature before, and I tried to dismiss it as my imagination.

I woke and sat up.  My brain was working as smartly as it could to understand what I had seen.  I knew the land in my dream.  I had hiked and prayed there twice.

The creature reminded me of a yeti-type of being.  I have heard brief descriptions by indigenous people of such an inter-dimensional figure as a kind of nature spirit or wild man, or wild woman.

Is it possible that there is a life-form in this local treeless landscape that is selectively visible to human beings? Is it there for those it allows to see?

I knew I had to search for the truth. 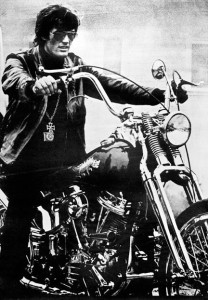 the dawn. Drips from the night’s smattering of rain fell on my neck. The sky was overcast, ominous. Monsoon thunderheads hung in the atmosphere like sleeping giants.

As I continued to wake, I considered the route I might ride to my coffee appointment. I descended to the patio while pinching into my front pocket a friend’s Harley-Davidson gloves.

I was thinking, “Yep, it’s still there.”  I had covered the motorcycle with a tarp the night before. “Yep, there’s still a motorcycle under that tarp.”

“What am I doing?” my brain exclaimed. “I’m sixty-two years old and haven’t ridden a motorcycle in thirty years!” The last one I was on I left at forty-five miles per hour, slammed my helmet into the rocks of a motocross trail in the middle of the Sonoran Desert. “Dodged a bullet that day,” I keenly observed to myself.

My Ford 4 X 4 pickup truck broke down, and a dear friend loaned me a motorcycle. As I looked the machine over in the daylight, I thought, “I’ve never ridden one of these before.  Wonder how it handles?“

Funny how new experiences remind us of old ones. Getting ready to ride reminded me of my high school buddy Digger and his Harley Sportster. Extended forks, low seat, the sound of the ratcheting kick starter, the engine roaring to life. Digger’s red beard in the wind. Hog heaven, some would call it. And we all agree, nothing else in the galaxy sounds like a Harley.

I pulled off the tarp, grabbed that baby by the handlebars, and sat down. I lingered in the moment, remembering Peter Fonda, Bruce Dern, and Nancy Sinatra in the 1966 movie Wild Angels. I think it was my friend Rolls that had the sound track album back in the sixties, and I mean nineteen-sixties.

As small-town teenagers lusting after motorcycles, looking desperately for something to rebel against, and well, . . more than a passing interest in short skirts and tall boots, we boys used to huddle around the record player and listen to the opening sound track to the movie, feeling the unconscious rumble of something out of reach in our simple lives.

I put on the Harley gloves, and sat with both feet on the ground, straddling the unfamiliar and silent machine.  As I turned the key on, I called up the memory of that movie soundtrack.  I could hear the garage door opening, then the monster of torque being forced into life, its engine grabbing and gasping for air, ultimately blowing exploded gases out its tailpipes like a medieval fire-farting dragon. Sure the Harley shook, but so did the earth.

Pulling out of my driveway I could see Peter Fonda in his black leather jacket, his tinted teardrop glasses, his unkempt hair. I could hear the chopper on the album ease out of the garage and move to a two-lane blacktop.  Then shifting gears and animalistic internal-combustion bellowing.  In my personal vision this is where John Kay and Steppenwolf build the testosterone-fueled climax with their primal biker-rock-mantra  Born to Be Wild!

With all that coursing through my veins, I was on the empty back street of a small American town, the yards and mailboxes slipping by like last week’s memories. Two horses looked up, and a dog barked. A cat scurried to get out of my way, then paused to stare over its shoulder.

A young woman opposite me at the four-way-stop gave me a long look.  My scooter hummed more loudly as I accelerated passed her. I could feel her gaze as I pulled away and quickly pushed it to thirty-miles per hour.

I had to admit it felt weird having my feet and knees right there in front of me like I was a kid sitting at a school desk.  I had to resist the urge to use a clutch and shifter.  It was smooth, quiet, just turn the twist-grip and go.

From the Genuine Scooter Company, the Buddy model, a 4-stroke, 150cc wonder.  A preciously pretty machine.  A pleasant shade of green that could be easily hidden in a pea patch.  A big shiny headlight on the top of its steering column and fairing. My friend’s green woven grocery bag hung by its handles from a purse-hook above my bored and restless feet.

The rushing wind and sounds of nature were muted by the face shield and helmet, but I could feel the balmy breeze on my sun tanned and naked knees. No traffic. Damp pavement. I could not help smiling. I looked so cute, I was irresistible.

Upon arriving at my destination, I swaggered a bit as I put the scooter up on its stand and I took off my helmet. It was a beautiful ride and a beautiful gift from a beautiful person.

Friends, good friends, bring out the best in us don’t they?  Some great thinker once said you can count the number of true friends in a lifetime on one hand.  I think it was probably said by somebody in their  sixties, and I mean the age group not the decade.  It takes that long to be able to look back and see the forks-in-the-road of one’s life.

Reveling in old memories and new ironies, a faint and tickling spiritual chuckle rose up in me.  Some comedic corner of my brain was singing in John Kay’s whiskey-soaked gravelly voice, 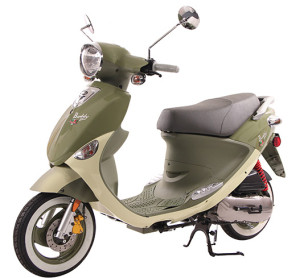