(an excerpt from Indians & Aliens – and unexpected short stories) 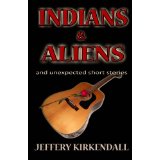 Grace and Jack sold their beloved home in Dickson County, Tennessee and left their twenty years of trauma counseling business to move to north-central Arizona. It was an unincorporated area of mile-high desert five miles out an undedicated dirt road. There was no one between them and the two-lane blacktop to the east. Jack said he dreamed of this place a year before they bought it, when leaving Tennessee was unimaginable.

As the raven flies, Apache Wells was midway between Iron Sight Gun Range and the Feather Mountain Spiritual Center. Depending on atmospheric conditions, one might hear automatic weapons fire from over the southern hills or heart-felt prayers and meditations from atop the distant northern mesa. Both seemed to anticipate a coming world catastrophe.

The road to Apache Wells was miles of tire-shredding rocks and scattered pockets of ankle-deep dust as fine as baby powder. It was hard on truck tires, suspensions, air filters, electrical systems, and people with spinal problems. During the decade of drought, dust storms could roll across the flat valley floor. They could form as dark roiling tsunamis, spitting sand and gravel bullets. Piling armies of tumbleweeds could take down a mile of wooden fence posts strung tightly with rusting barbed-wire.

One of the first things Grace and Jack learned about their new homeland was that it had been the subject of an international news story a few years prior to their arrival. There had been a number of impressive UFO reports from the Apache Wells area. Later the same night, identical reports came in a hundred miles to the south. It was called the Lights Over Phoenix Sighting.

During the autumn of their arrival, Jack and Grace awoke in the midnight hour by one of their outside dogs, Sparky. Country folks have dogs for security and protection, as well as companionship, and Jack knew the distinctive bark of each of the five dogs.

What he knew for sure that night was that the most easy-going member of their pack was barking in an uncharacteristic manner. She was intensely focused and upset and responding to “something” in a frenzied barrage of canine concern the others joined in on.

Groggy with sleep, Grace asked, “What are they so upset about?” “I don’t know.” Grabbing a flashlight from the night stand, Jack told Grace that he was going outside to check around. Briefly he entertained the thought of taking his grandfather’s shotgun, but dismissed the idea as over-reactive.

The creaking of the screen door sounded thunderous as Jack tried to let himself out quietly and descend the porch steps. The gravel driveway reminded him that it would have been wise to put on some footwear. Walking around the side of the tool shed he shined the flashlight in the direction of the dog kennel and could read the big red letters. “The Redbone Club.” The dim old, off-and-on, flickering flashlight reminded him that new batteries should be included on his next shopping trip.

On the moonless night, he could see that sure enough, his happy-go-lucky Sparky was barking ferociously in the direction of the nearest neighbor to the west. He wondered if someone was breaking into the vacant house in the distance.

Directing the fragile beam in that direction, Jack’s breath caught in his throat. A shimmering motion glowed at the very edge of the flashlight’s reach. A small cloud of sparkling and wavering dust danced in the inky darkness. It was about his own height and in the form of a slender person. He watched as it undulated sideways but maintained its distance.

Jack had a long-held intuition that someday this might happen, but he never told anyone, well except Grace. 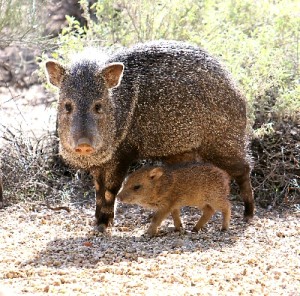 this is the Super-Cyber DJ,

the Doctor of Unusual Views,

the Voice of Great Ideas,

with a public service announcement.

First.  Thank you Dennis Liddell for the beautiful Javelina photo.

Friends, I let my garden sprinkler run too long and turned the Hobbit Hole just outside my longhouse door into a silky, smooth chocolate-pudding consistency.

This morning I found pristine Javelina hoof prints that, if fossilized today, would be ecstatically studied by civilizations of future millenniums.

I know they look alien, but the creatures have been here for eons and come in peace.

Like us two-leggeds, they seek food, water, a little bit of love, and a safe place to raise their offspring.

Let us respect them, not fear them.

Thank you for listening to this alert.

Now consider this for a moment.

Take a break from the nonsense-noise of life.

Pick out a good book.

Sit on the earth under one of the standingpeople.

Recall something for which you are grateful.

Then open your eyes

Until my next Almost Live! cyber-cast, . .

This is J.B. Goode reminding you

I cannot be absolutely sure of that.