“Making music is the most fun a human being can have in life with his/her  clothes on.”

That has pretty much been my experience. When everyone’s talents and passions come together, something beautiful happens, and we are transported, . . even if just for a few moments, . . to a place where magic happens, and three ordinary guys can Run With Coyote.

I read a story about one red man’s first encounter with a white man. The Native man watched the European man from a distance in the forest. The newcomer to his land carried a heavy iron stick that he pointed at brother deer. A thunder-clap exploded from the stick and brother deer dropped dead.

What startled and confounded the Indian man is that he watched as the newcomer turned and walked away from his kill, back to his camp, while admiring his weapon.

In astonishment, the Indian man’s mind thunder-clapped, “What kind of creatures are these?!”

For me, the spirit of that story combined with a local newspaper article twenty years ago.  There was an upcoming project by authorities in north-central Arizona to “thin the coyote population” by shooting them from a helicopter with a shotgun.

My original title was “Shotgun Coyote” and this song is my crying out a warning to the coyotes.  Doc helped finish off the lyrics and made the recording happen.  Bubba worked his guitar and studio gifts.  The day we created this song, in our minds and hearts, we were  with the coyotes.

Perhaps you will be there with us. 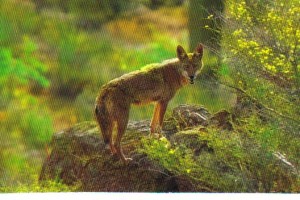