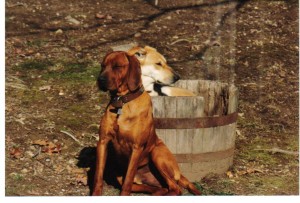 The following is an excerpt from Jeff’s novel scheduled for an autumn release. It is the sequel to Indians & Aliens and unexpected short stories. This second book of his Dreamer Series is titled Grace & Dreamer – extreme love stories.  Be aware, there is in this piece direct reference to brutal violence.  There is also a happy ending.

. . . During that pause, Buddy spoke up. “Do I remember you sayin’ that your wife has a fondness for Redbone Hounds?”

Then Buddy explained that his dog Big Joe had drug his doghouse across the back of their property to mate with their female, and they had an unexpected litter of puppies. He told Jack that if he brought Grace out in a couple weeks, he would give her the pick of the litter. He gave Jack their phone number and Jack wrote down the directions to finding their place.

Jack told Buddy that he would talk it over with Grace and see what she thought.

This was a big issue for Grace, and Jack knew it. Her beloved dog Napoleon was the Redbone Hound of her adolescence, a gift she cherished and found joy in during some of the hardest times of her life. She walked with that dog and talked with that dog and slept with that dog.  Her stepfather decapitated Napoleon in front of Grace with one swing of an axe . . to teach the girl a lesson.

Grace was not sure she could open the doors to that painful memory.
She was not sure she wanted a living, breathing daily reminder of her early life. Eventually she decided they could just go look at the puppies with no intention of picking one out. She figured they could not compare with the famous bloodline that her dog had come from. “I’ll know a good hound when I look them all over,” she said.

He replied, “Your own spirit voice. Don’t be afraid to hear your calling.”

“Oh,” she responded when she recognized what Jack meant. Even from the truck, she could see, “Yeah, they’re good looking dogs.”

“Well,” he went on, “take some time with them. See how it feels to you. If you want one, we’ll take one home. If not, that’s all right too. Really Hun, whatever feels right to you.”

Then Jack backed away and left her alone with the litter of six Redbone  puppies. At that moment, time went wild in her mind. It had been forty years since she last touched a hound like those. The smell took her back to the day she fell in love with Napoleon.

The moment was surreal, and she became lightheaded and had to steady herself by grabbing the corner of the puppy’s pen. New Hampshire, New York, Connecticut, and Vermont.  Live free or die country was another lifetime ago. Suddenly it was like yesterday. Deep woods and French Canadian accents, dancing on wood floor houses that shook under the weight of people partying , long walks along the creeks, hiding under the fallen leaves to feel safe, fanciful images of racing the wind as she stared out the window on long train rides, beaches, clambakes, hurricanes, Central Park, Sheepshead Bay, The Brooklyn Dodgers, writers and artists, made men, prize fighters, limousines and staying alive.

Her mind reeled as she was in Tennessee, home of Patsy Cline, Loretta Lynn, Lefty Frizzell, Johnny Cash, namesake of Tennessee Williams, home to young Cormac McCarthy. She lived an easy drive north of that place she read about as a girl in Junior High history class. She remembered a Civil War battlefield called Shiloh, and she thought it meant “place of peace.”

Jack passed the time with Buddy. “Jack I’ve loved my wife a little, loved my children a little, and well . . I’ve loved my dogs a lot.” He paused for Jack’s smile. “It’s been a good life over all.” Then he looked off towards the woods, like a man at peace, like the list of life decisions he had made was complete and satisfactory.

Jack looked down at the earth and kicked the dusty clay soil. “Yeah, Buddy. What else can we ask for?”

Just then Grace looked his way, and he decided it was time to join her. By the time he started in her direction, Buddy was walking with him quiet, the way two men do when they are comfortable with each other, like they know how the other thinks, and they respect each other. Grace was still staring at the puppies when the two men arrived next to her.

She excused herself, and the two men and June watched Grace make her way down to the back part of the property to meet Big Joe and Daisy, the momma of the brood. Grace talked with them a long time before slowly starting uphill to the people and pups of the present.

She was spinning with thoughts of her early years in Arizona. The rape ordered by Liam, the pregnancy, the bikers, card sharks, front men, hustlers, sisterhoods, battles fought, battles lost.

Growing up in New England sexually abused was her first lifetime. Her first marriage was her second lifetime. Children raised, children abused and children healing. Her sons and daughter struggling to find their ways in life. The church she found. The minister who inspired her. Her personal therapy. Divorced after twenty-five years. Two graduate degrees wile working her way through college. Clinical Director of a prestigious organization.

Then she met Jack.

As she strolled up the hill to the puppy pen where the others gathered, her mind caught up with real time and she gazed at the man of her third lifetime, her precious husband and partner. She walked up to him gracefully and put her arms around him. “I love you Jack Goodman.”

He put his arms around her. “I love you Gracie Ann.  What you gonna name that pup you were holdin’?”

GOODBYE JOE, excerpt from the coming novel GRACE AND DREAMER 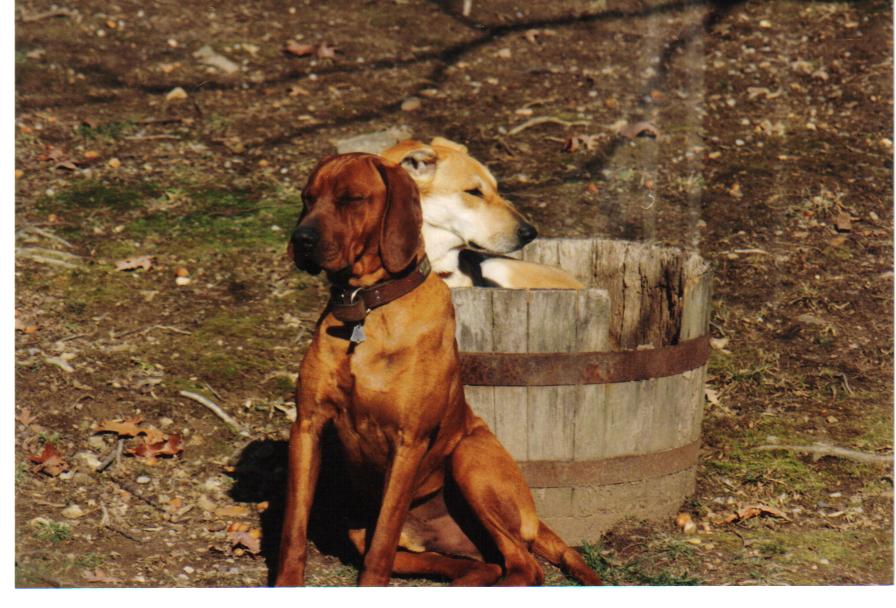 Jack sat on the porch bench, with the cold fingers of one hand wrapped around his hot cup of coffee. With his other  fingers he held up the famous “barrel photo” of Joe and their old friend from the past Shiloh, the Tennessee Tick Hound.  Jack looked away and noticed that Joe’s water dish froze over for the first time since the past winter.

Jack was pretty sure that he was going to call the vet and see when he could come by to help them with Joe. Jack talked with Doc’s receptionist, explaining the situation.  It was their hound Joe, and she talked to Doc, and he remembered Joe.  Everybody remembers Joe.  She called back and said Doc could be there about noon. Jack looked at Grace who was nodding yes. It happened that quick. The decision was made.

Jack sipped the coffee and reached for his journal. He knew he had to write his way through this. Joe was what Native People called Big Medicine, the red dog in one of Jack’s dreams in which he watched a red dog and a white dog fighting, unsure which dog would win.

Joe was a Healing Dog in Grace’s life for over fifteen years, the kind of dog you are lucky to know once-in-a-lifetime. Joe had slept on his bed on the floor next to Grace, side-by-side for nearly ten years. His Redbone talking always, always brought a smile and an outburst of pleasure from Grace. It had been an absolute joy to see him talk to her while she talked hound-talk to him, in the middle of the house in the middle of the day, and they both relished it.

Jack watched Joe close in on old age. In the last days, Jack carried Joe up and down the steps out of the bedroom, the steps on the front porch, and the steps off the back. Joe came to trust Jack in ways he never had before and would wait for Jack’s assistance whenever he needed it. Joe was able to do his daily hunt, just a much smaller circle in the end, and the old boy still got excited about finding new smells and following a trail.

No coons in the high desert of Apache Wells, Arizona.  Joe was a long ways from his birthplace of Bucksnort and the dense forests of Middle-Tennessee.  But Joe compromised and followed his nose tracking a rabbit or quail to its hiding place and flushing it. He just could not chase the critters and seemed at peace with that. Joe would find the place Jack dumped out the last little bit of milk and corn flakes days earlier. Jack stood in awe of the beauty of such creation.

As he sat quietly Jack searched for the words that might help him get through Joe’s death. He figured Grace was bound to take it hard. He held the pen respectfully and felt his journal’s pages flutter with the breeze.  As he always does, he let words bubble up, and he put them on paper, and they often flowed from his mind in illogical fashion. He found himself hearing the openning music of an old Hank Williams’ tune “Jambalaya.”  Then he wandered off into related thoughts and a major decision, and he wrote. 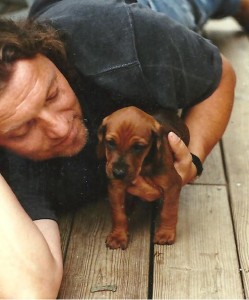 With the melody in his head, Jack finished.

Are there Redbone Hounds in heaven?

To hear the song in Jack’s head,

Hank Williams 19 Jambalaya (On the Bayou)