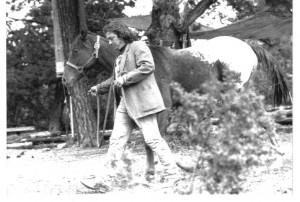 Dear Readers & Listeners,
I wrote the foundation of this song when I had been through enough hard times in life to appreciate the fact that facing the truth is not only the-right-thing-to-do, it can also be the most mysterious and exciting.

.
The song shares the notion that facing the truth and doing the right thing have an intuitive rhythm. When practiced and done well, you don’t have to think. You sense the mood, act, and experience the quiet joy of the truth setting you free.
This song came in a dream. Bubba captures this quality with his truly fine guitar work. The magic of Doc’s vocals brings the message home.

.
Replies and sharing are greatly appreciated.
Many blessings to you and your relatives,
Jeffery Kirkendall

I wrote the foundation of this song when I had been through enough hard times in life to appreciate the fact that facing the truth is not only the-right-thing-to-do, it can also be the most mysterious and exciting.

The song shares the notion that facing the truth and doing the right thing have an intuitive rhythm.  When practiced and done well, you don’t have to think.  You sense the mood, act, and experience the quiet joy of the truth setting you free.

This song came in a dream.  Bubba captures this quality with his truly fine guitar work.  The magic of Doc’s vocals brings the message home.

Replies and Forwardings are greatly appreciated.

Many blessings to you and your relatives this Year 2013,

Come with me; let’s take a ride
On an Arapaho pony called Dreamer
Wrap tight your legs; let loose the reins
Open up your eyes to your Redeemer

Yes, listen to the call of your Redeemer

Come with me, on a starlit night
Ride to the edge of all you know
Sacred canyons, whispering winds
Mysteries you’ve yet to know

There are powers you have yet to know

Come with me, and I will show you
The light your spirit longs to show
You’ll cry out with passion, and you’ll weep with joy
To find out who you are, you must surrender

Come with me; take a leap of faith
On this war pony called Dreamer
If you ride with me, I’ll set you free
I’m what your soul’s been yearning for

Yes, I am Truth, your Redeemer

THE FIRST TIME I SAW A HORSE RUN 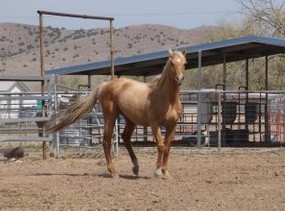 I have become a sixty-year-old grandfather, and I am happy to report that I still sometimes see my life through the eyes of a boy. How much I have learned. How much I might still discover.

As a student and therapist in the field of childhood sexual abuse for thirty years, I know some things, and “firsts” are monumentally important in life. For many of the children I have worked with, I was the first man they ever got to know who treated them with the parental respect every child is entitled to as a birthright.

Now I have seen a lot of horses run. I grew up with the inventions of color television and Technicolor movies. Children and adults all over the world love to watch American cowboy and Indian films. In my lifetime I have seen moving pictures of thousands of horses runing. But horses in the flesh are what stick with you a lifetime.

Carol, my beloved wife of twenty-six years, often calls up her memory of a horse she saw from the window of a moving train when she was a girl. She is sure the horse was racing the train just for her pleasure. What us Indians and cowboys know is that horses can race with spirit winds and commonly talk with girls and boys who are naturally open to hearing them. 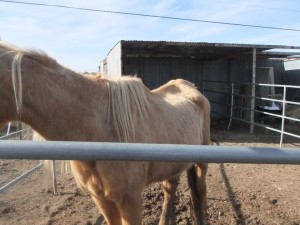 Jaunary 1st of 2011, Paulden, Arizona. From our dining room window, Carol and I watched five horses starving to death next door. She took me aside and gave me that look she used to give me when we were saving sexually abused children for a living. As she pointed, she told me, “That one is not going to make it, it’s time to take him.” She was pointing to the faltering stud who had broken his penis while trying to mount a mare through the pipe-fence. In spite of calls to the owner, his penis hung un-retractable and untreated for two weeks like a heavy lump of spoiling raw hamburger. 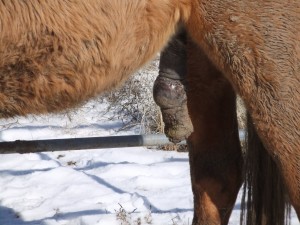 We knew we were going to make the sheriff and livestock officers’ lives more difficult, but as the antiquated livestock laws of Arizona are written, officers cannot intervene until the horses are inevitably at death’s door. As our daughter Mary has regularly reminded me in the over-quarter-century of my fatherhood to her, to do less that what is necessary would be to fail altogether. That woman has a lot of her mother in her.

Once we had decided and conspired with our neighbors to do what we would do, we quickly began to see the humorous side, and we laughed about it. I told Carol in Mary’s presence, “If they take me away in handcuffs, Sweetheart, my dear wife, I will roll over on you in a heartbeat, get immunity, and testify that you were the ringleader!”

Carol said her and Bob, the neighbor who stole the other three starving horses that night, she said that she and Bob were going to sit in jail playing cards, and when the other inmates asked what they were in for, the two of them would look up and say in unison, “Horse thievin’!”

The livestock officer was a former hostage negotiator for the Coconino County Sheriff’s Department and was very good at his job.  He eventually brought us together with the owner and brokered an arragngement in which the woman signed over the horses, all of us avoiding jail time and lawsuits.  Then began the long process of saving Sonny. 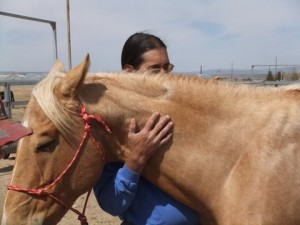 Our son I call Lame Wolf. Most people know him simply as Wolf. He is of the Choctaw tribe. His wife I call Two Antelope. The four of us are of mixed bloods and varied personal life stories, but we share the traditions of Native People and mainstream Christianity. We are a family learning to blend in many ways.

It was Two Antelope who used this thing they call the internet to create a Facebook page to which a couple of hundred strangers responded. Until that time, I had little use for this e-technology. She showed us all that an ordinary person with a passion and commitment could relieve suffering. She and all those who responded ultimately lit a fire under me to learn how to use this 21st Century communications to reach out to people for a good cause.

It was Wolf who was inspired to invent the device that soaked Sonny’s fully-extended penis over sixty-five times over a five-month period. A flexible bladder inside the cut-off leg of a pair of jeans, neatly sewed together on the end, the top hemmed with a wide strap, suspended around Sonny’s waist by a soft three-inch strap, which could be fastened over his rump with a sturdy plastic version of a seat belt clip.  We came to name this baggy denim condom the “Sonny-Soaker.”

It was Dr. Lane Kihlstrom that brought Sonny through the most critical time. Great vets are amazing people to behold and make every encounter a learning experience for us amateurs. It was he who sat on the ground under Sonny and used surgical scissors to cut away the dead tissue of the penis. Dr. Kihlstrom had people who we never knew who contributed funds to Sonny’s medical recovery. It was he and his assistant Kim who taught me how to pull a horse by the tail while applying diaper-rash ointment over Sonny’s abdomen.

There was Susan Gonzales and all the folks at Warren’s Hay-N-More in Chino Valley who offered guidance on nutrition and was the collection center for donations of hay and blankets. There were all the people who donated old bed-sheets, out of which I could construct a soft, porous horse-jock-strap which held Sonny’s penis up against his abdomen in a horizontal position, thereby maximizing blood-flow to his healing over the critical early months.

There were countless people we met who brought out feed, offered encouragement, contributed dollars over that year.  Sonny slowly came back from emaciation and infection.  It took eight months for Sonny to gain the health he needed to survive the rare and complicated next medical step.  I searched for months for a way for Sonny to be gelded and have his penile-amputation.  I told everyone I spoke with, “I just want to someday see him run like a real horse.”

For a year and three months. Sonny carried that heavy pendulum of scar tissue underneath him while we lived with the concern that if the poor boy had an erection, unable to retract his penis, the blood would pool, coagulate, and Sonny would die. 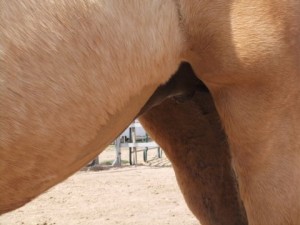 It was Karen Pomroy of Equine Voices Rescue & Sanctuary who rode to the rescue. It was she who connected with Carol Grubb of Arizona Coalition for Equines, and Dr. Taylor of Arizona Equine Medical & Surgical Center in Gilbert. It was Karen who connected with Ruthanne Penn in Flagstaff who transported Sonny from Paulden to Gilbert. It was Ruthanne who connected to Melissa and Paul Ambrose of Atlasta Home Horse Rescue in Chino Valley who transported Sonny from Gilbert to his rehabilitation home with them.

Sonny had become a living, breathing symbol, or totem, for our family and all those people involved, of what miracles can happen when a few people of like-spirit come together with many people of also-like-spirit and one-plus-one-equals three.  We are transformed by something greater than ourselves.

And so it was March 29th, 2012. I walked out into the arena at Atlasta Home to greet my old four-legged friend, who Melissa and Paul had worked with through his post-surgical phase. The four of us of our family came together with Melissa, her mother, and Doctor Karen to see Sonny run like a real horse.

All fears faded away.  A vision manifested beyond our imaginations. 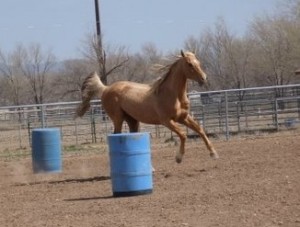 I was mesmerized, lost in a dream, watching his flagging tail, his braided blonde mane, his entire body moving and flowing. Captivated in my own experience, I eventually looked back to Carol, arm-in-arm with our son and daughter-in-law in wide-eyed awe.  Tears of joy ran down the face of my wife.  A forever memory for us all.

I shed the tears of a boy seeing his horse run for the first time. 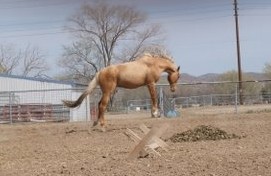 From our family to yours,